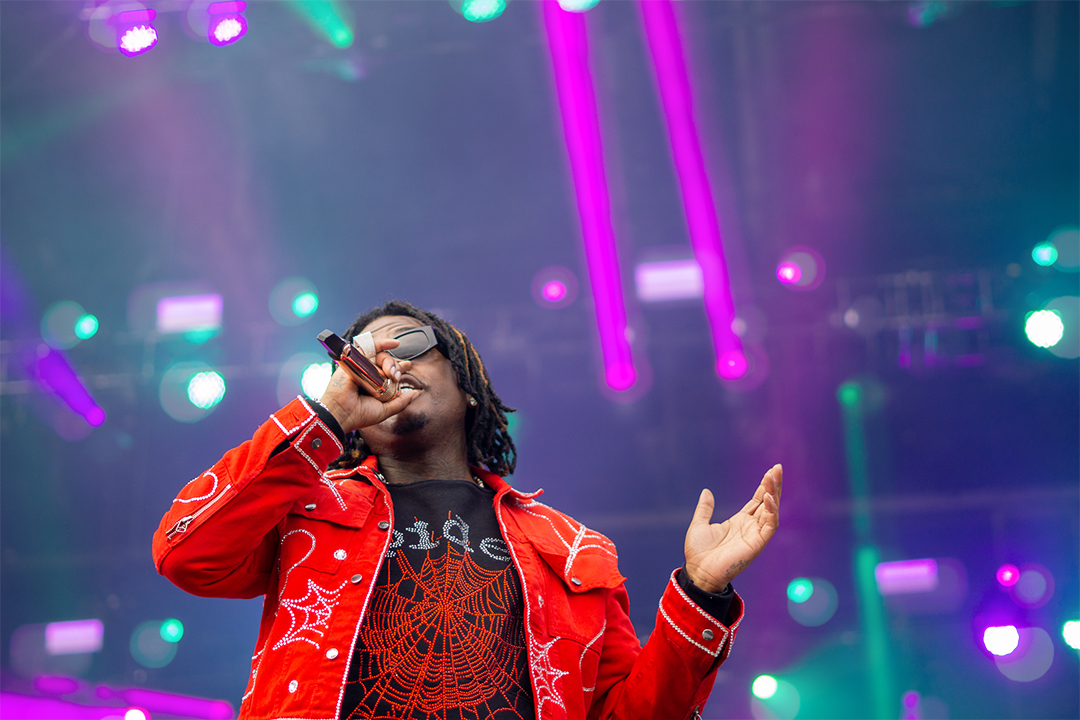 Broccoli City Festival quite literally fought through a storm this year to make its grand return to D.C., but its comeback was bigger than ever. After a two-year hiatus filled with cancellations and postponed dates, the annual music festival finally resumed its decade-long tradition to signal that we’re officially back outside.

“This year, Broccoli City made it its business to restore the feeling music lovers have so desperately missed in the DMV with its biggest lineup yet.”

Since COVID swept through in 2020, music festival season has been bleak and as unpredictable as this weekend’s inclement weather. But this year, Broccoli City made it its business to restore the feeling music lovers have so desperately missed in the DMV with its biggest lineup yet, and attendees were not disappointed with the outcome.

Co-hosts Gia Peppers, Rodney Rikai, and Little Bacon Bear ensured the crowd’s energy stayed high as they ushered some of our favorite global and local artists onstage for the thrilling showcase. Every artist who graced the stage bodied their performance, but beyond just putting on a good show, the highlight was the weekend’s resounding theme of gratitude.

Even in steady 52-degree weather, the 2022 Broccoli City lineup couldn’t be more grateful for the fans who stuck through their sets. R&B newcomer Joyce Wrice energetically performed her new “Iced Tea” single on Saturday, while rising star Tems soothed the Sunday crowd with warm hits like “Free Mind” and her summer-smashing verse/hook from Wizkid’s “Essence.”

Larry June sent love out to everyone in the crowd for cheering him through his West Coast-centric performance. “Can I get a good job Larry?” the San Francisco native boisterously asked the crowd — and fans answered back with just as much enthusiasm.

Others like Don Toliver and Gunna gleefully hit the stage ready to turn the Broccoli City crowd up — whose fans were just as psyched as they audibly gushed with excitement. From Toliver’s “After Party” and Masego-assisted “Mystery Lady” to Gunna’s “Sold Out Dates,” “Pushin P,” and “Ski,” there was hardly a scarcity of bangers. If anything, the crowd would’ve gladly allowed their sets to go over if it meant more head-nodding hits.

Though Lennox and Walker were the main attractions this year, Wale and friends was the highlight that represented D.C. to the fullest. The rapper damn near brought the whole city out as his crew flooded the main stage for a crowning moment on Saturday; performing classics like “Clappas,” “Lotus Flower Bomb,” and “No Hands.”

The Broccoli City team fought through its fair share of obstacles this weekend, but for attendees, the end result was well worth it. Great live music was the festival’s strong point, and wrangling a lineup as strong as this is a commendable effort, to say the least.

Every festival has that special feeling; being surrounded by strangers whose only bond is a shared appreciation of good music. But looking out at the interactive crowd, you’d almost mistake it for a family reunion. This year’s Broccoli City Fest was the ultimate celebration of culture, music, and joy, and not a single moment was wasted.

250 Words or Less: Brent Faiyaz Is a Lost Kid Finding Himself on “Wasteland”