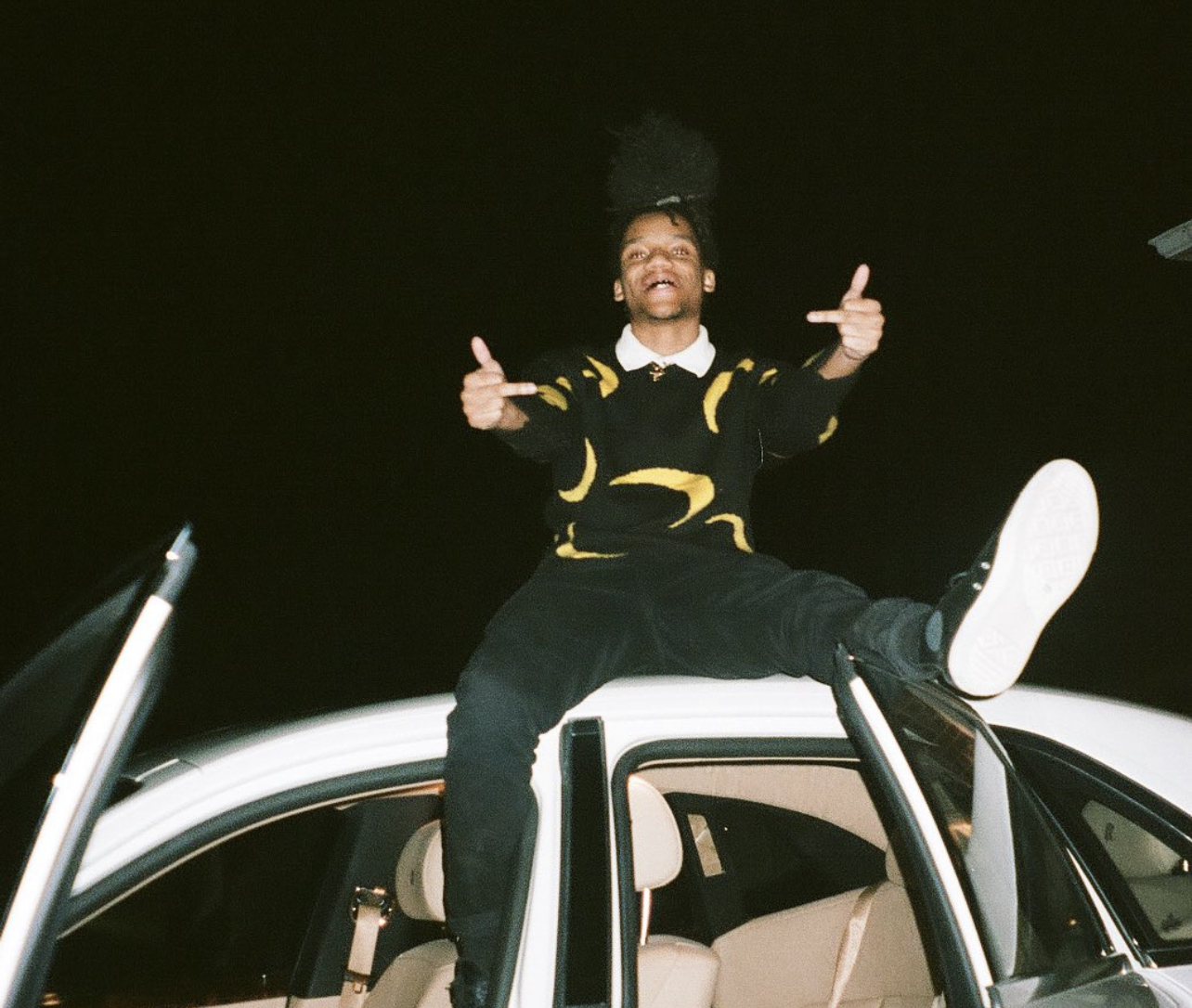 YTK is taking his viral hit and turning it into a beautiful moment for his career.

Who knew a song that was made a year ago would end up breaking the internet in less than 24 hours? East Baltimore artist YTK already knew he was onto something great with his music, but the minute his latest single, “Let It Off” – a remix of Mariah Carey’s “Shake It Off” – set social media ablaze this weekend it only confirmed that he hit the jackpot.

The song dropped early Friday morning and by that afternoon it was already getting thousands of likes and retweets on Twitter, and spreading like wildfire across several pages on Instagram. As of today, the video itself has garnered over 82,000 views on YouTube – the highest viewed video on YTK’s channel – and well over 300,000 views off his viral tweet.

For weeks YTK has been putting everyone on notice, teasing fans and followers of what he has in store for us this year. His aspirational declaration was actually the work of manifestation that did way more than he anticipated. The revamped song was already going crazy on social media, but once Mariah Carey stepped in the picture, it quickly became a trending topic online.

Even with all the new attention on him, YTK isn’t letting the numbers shake him up at all. The main thing he’s concerned with is fans connecting with his music genuinely and organically. YTK is a name on everyone’s lips right now, and if his latest stunt wasn’t enough indication of what he’s truly capable of, perhaps a closer look at his work is needed.

We recently spoke with the rising artist about his newfound viral fame, his journey with making music and his plans for the future.

How does you feel right now considering all that’s happened in the last three days?

The main thing I’ve been thinking about is how it feels that all the sh*t I’ve been working for is hitting all in one weekend. It’s definitely exciting. I think people would expect me to be a little more excited [about this moment], but I’m more so excited to really get to work. Now I have the resources that I’ve been gunning for these past 10 years or so. So I’m just trying to use what I now have to capitalize on the moment.

What changed after the song and video went viral that’s going to allow you to do all the things you want to do with your music?

The eyes and the recognition are now here. It would be a different situation if I hadn’t already been working. I had sh*t lined up and this was just a step in the calendar for the whole year. Sh*t has definitely changed, but the only thing that really significantly shifted was now people see me. I’m about to be working the same, but it’s going to look like I’m working a lot harder because now everybody’s looking.

How did Tommy Banks and Questlove get involved in boosting the song?

I’ve known Tommy for a minute and he’s been supporting me since 2018. I would drop something and he would always support and post [it]. He would always say, ‘I’m an R&B n*gga, but I love this rapper. This [guy] has something special.’ What’s crazy is I hit hella publications and my own personal connects about [“Let It Off”] to let them know I’m dropping on Friday. Tommy was the only [person] to hit me back super fast and he was the only one that was excited. I was especially trying to send it to [him] because it’s an R&B flip and with the amount of followers he has and his connections, I knew that would springboard it.

I don’t even know how Questlove got [involved], I guess it just came across his TL. I think he mentioned that in the past [he] was in the same situation where he had to get a sample cleared in 24 hours, so [he was like] I’m going to try and pay it forward and use my connects. I was like, damn Questlove you sticking your neck out for me, that’s crazy.

Can you clear up the business around getting the sample cleared for “Let It Off?” Did you have to do that in order for the song to stay up?

Hell no [laughs], listen this is a vibes operation. First off, I made the song a year ago and dropped it on SoundCloud. I didn’t promote it, I just tweeted the link out one day. Whoever was paying attention was going to see it. After awhile I made it private because I said f**k it I’ll work this into a release schedule. At the time the way I was doing it, I didn’t have all the pieces together. I didn’t know it’d be as big as it was.

Now what’s going on with Mariah Carey? I know everyone wants to know if she was really serious in her tweet.

[That was] a joke, so I got the same information as y’all – the screenshot from Questlove saying like ‘Mariah Carey is a prankster.’ She was just feeding the hype with me and honestly I’m taking it as a really beautiful thing. Being an artist, you’re really sensitive about your sh*t. So if some random Baltimore n*gga with a ski mask, fronts and guns remix your song, it has to be good for you to even say something. If she really thought it was a**, I think she would’ve really quietly hit her lawyers.

Baltimore is a city where rappers are a dime a dozen. How did you figure out a way to break through the noise and stand out as an artist?

I feel like the reason why I broke through is because when I first started rapping, it wasn’t because everybody else was rapping, it was because I actually liked doing it. So when I think about the over-saturation now, as far as my story goes, that wasn’t always the case. Everybody wasn’t always trying to rap. When I was rapping, I really felt slighted by a lot of n*ggas because I wasn’t going to college, didn’t want to take the school sh*t serious and didn’t want to do some kind of trade or anything like that. I felt a little slighted, but I feel like that’s why I stand out. Because I really just want to do this sh*t. I can’t do nothing else.

If you had to describe your sound to someone who has never listened to you before, how would you classify it?

I think one of my uncles was listening to my music [one day] and it was the best way I’ve ever heard it categorized. He said I make soul music – contemporary soul music. I vibe with that a lot because I feel like most of my music I actually think about it before I make it. Like it has some kind of message to it.

I feel like you’ve always been in that lane since you first started making music. Or is that something that you kind of figured out down the line?

It’s definitely something I figured out down the line because it was something always had kind of in me, but I was afraid to express it. Cause when I first started making music, I was just releasing beats cause I was afraid to put my vocals on there. Then I did a song called “Sh*ttin’ in the Sink” where it was literally just me talking about sh*tting in the sink, but it was just because I was afraid to really express myself. And then the song immediately after that was really emotionally, like I’m talking about getting my heart broken, I’m dropping names, dates, what we did. When I did that song, that was like super vulnerable [for me]. I was like, all right, this feels right. I should follow what this feeling is.

Around this time last year, you released your EP, From Grace, For Grace. What inspired the name?

Truth be told, I was reeling from a lot of personal events that had just happened and it kind of felt like I was on the bounce back from that. So a few of those songs was about a woman – that’s kind of where the name Grace came from, but then grace also kind of played into the [literal] definition of grace. Like forgiveness and graciousness, and the word grace just stuck with me so hard that I kind of wanted to give the title a feeling where grace means more than one thing.

What were you trying to accomplish with that project?

I feel like a lot of my projects right now, truth be told, the meaning is really found after the songs are made. So it’s really just a time capsule of what I was going through at that time. For a while I couldn’t listen to my songs back because like it’s such a visceral feeling to me that I haven’t addressed. I’m almost taken back to that moment. But a lot of those songs was just me capturing a feeling that I was feeling at that time and then I made sense of it to drop it as an EP.

At this stage in your music career, are you intentional about what your music videos actually stand for?

A hundred percent. That’s why I feel like people gravitate towards my videos, because I treat my videos as an extension of the song. It’s another way to tell a story. I feel like storytelling is probably the most important aspect of music like that. The relatability aspect that I understand [something] from a Point A to Point B kind of thing about it. If you do that with a visual as well, you really just build that world and you kind of immerse whoever the listener is into what the feeling is. And I feel like my most important goal in music is that I can bring n*ggas into my world.

Is there anything else we can expect this year? Are you going to work on another EP, more singles?

I got a lot of sh*t planned for this year. I don’t want to jinx it, but I’m going to be rolling some sh*t out and n*ggas going to know in due time. I’m not going to hit nobody with no super surprise drops but there’s [definitely] announcements coming.