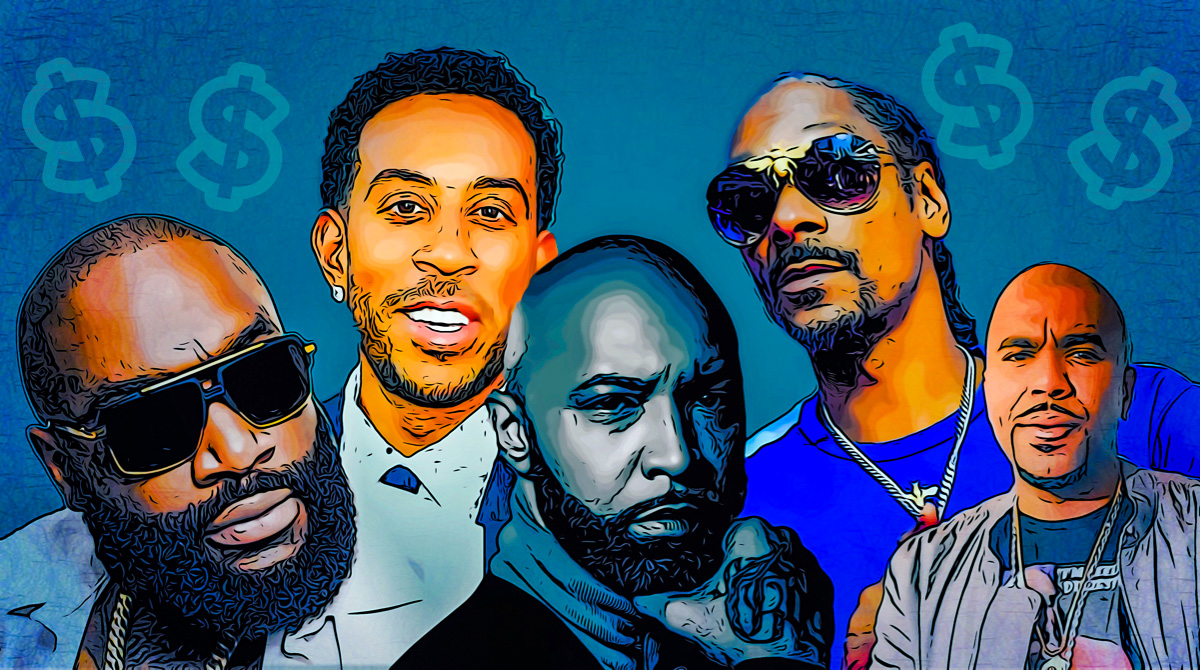 Hip-Hop is the youngest genre in music history, and it took 25 years for its artists to start seeing millions of dollars and change their lifestyles. As Hip-Hop became more mainstream, rappers were being criticized for glorifying the glitz and glamour that consisted of jewelry, clothes, cars and bottles. A decade later, the growth of Hip-Hop is still on full display.

As Hip-Hop grew in popularity more money started to be generated. The days of artists getting paid solely from music are over. It’s common for artists today to have multiple streams of income through brand partnerships, investments and entrepreneurial ventures. In 2021, Hip-Hop artists have a chance to build generational wealth, which is why I love seeing the youngest genre in music create those opportunities.

We all know the big names such as Jay-Z, Diddy, Kanye, Drake, Dr. Dre, Birdman and more through the moves they’ve been able to make outside of rap. Here, I highlight 10 rappers and their endeavors that I believe don’t get talked about enough.

Aside from being CEO/founder of the MMG record label, Rick Ross’ – whose real name is William Roberts – latest venture reflects a new chapter in his career. Which just so happens to be a desire to rediscover his path in wellness with a $1 million investment in Florida-based telehealth startup, Jetdoc. Ross also owns 25 Wingstop locations and has ownership stakes in Checkers, Rally’s and Belaire Rose Champagne. And if you need anymore proof that the boss is still out here making moves… Superfly and Coming to America 2 were both filmed in his Georgia mansion.

The D O double G is everyone’s favorite uncle and someone who has always found different ways to get to the bag. Bursting onto the rap scene with his debut album, Doggystyle, followed by his hit song, “Gin and Juice” in 1993, Snoop has become one of the most recognized rap figures in the world. Snoop has appeared in numerous films and TV shows throughout his career, including roles in The Wash, Baby Boy, Half Baked, Training Day, Starsky & Hutch, Brüno and horror films Hood of Horror and Bones. He also co-starred with rapper Wiz Khalifa in the 2012 movie, Mac and Devin Go to High School.

I think it’s common knowledge that Snoop keeps one rolled, so it’s no surprise that he launched his own cannabis brand, Leafs By Snoop, back in 2015. In the fall of 2016, VH1 premiered a new show featuring Snoop Dogg and his friend Martha Stewart called Martha & Snoop’s Potluck Dinner Party, which featured games, recipes and musical guests. Snoop Dogg and Stewart also later starred together in a Super Bowl commercial for T-Mobile during Super Bowl LI in February 2017. Snoop also recently provided commentary for Mike Tyson vs. Roy Jones Jr., who some pundits described as having “won” the night through his colorful commentary and reactions.

T.I. is one of the most successful rappers of the 2000s era. He’s the founder of the Grand Hustle record label, a pioneer of the Southern Trap music sound and has collaborated with some of the biggest names in music. The self-proclaimed “King of the South” began branching outside of music with his hit 2006 movie, ATL. Then in 2010, he starred in the crime action thriller film, Takers, and a year later premiered his own family reality show called T.I. & Tiny: The Family Hustle on VH1. In 2008, T.I. announced the launch of his clothing company, A.K.O.O. In the fall of 2019, T.I. launched his podcast, “expediTIously with Tip “T.I.” Harris,” where he’s chatted with the biggest and brightest stars in the industry. He also appears as a judge on Netflix’s Rhythm and Flow, which is currently gearing up for its second season.

Joe Budden was known to be one of the elite emcees of the early 2000s. The Jersey native’s hit single, “Pump It Up,” hit the streets in 2003 followed by his self-titled debut album. After disputes with his then label Def Jam, he was dropped and his second album was never released – but that didn’t stop him there. Budden continued making noise in his music career in the underground/indie scene releasing his critically-acclaimed mixtape series, Mood Musik.

After a brief stint in the group Slaughterhouse and appearances on reality Tv shows, Budden transitioned into the world of podcasting. The Joe Budden Podcast – previously titled I’ll Name This Podcast Later – took off after a clip went viral of Budden harshly critiquing Drake’s Views album back in 2016. Budden released his final studio album, Rage and The Machine that same year. In 2017, he would become co-host of the popular hip-hop debate show, Everyday Struggle on Complex alongside DJ Akademiks. In 2018, Budden signed an exclusive podcast deal with Spotify and became executive producer/ host of State of the Culture, a panel style talk show on Revolt TV. Throughout Budden’s career, he has been known to be outspoken and go against the grain, and his raw, gritty rap persona helped him become today’s Hip-Hop Howard Stern.

N.O.R.E., aka Noreaga, is a Queens native rapper who first rose to prominence as one half of the duo Capone-N-Noreaga (C-N-N), alongside fellow Queens rapper Capone. He would also have success as a solo artist with singles like “Superthug,” “Banned from T.V.,” “Nothin’,” “Oye Mi Canto” and “Mas Maiz.” N.O.R.E. is also known for his role in the 2005 film, State Property 2.

In January of 2015, N.O.R.E. launched his Drink Champs podcast with Miami hip-hop pioneer DJ EFN where they swap stories about the old and new days of Hip-Hop while drinks are consumed. The show has had special appearances from iconic rappers such as 50 Cent, Rick Ross, Ja Rule, Nas, the late DMX and many more.

Common is known for his conscious style of rap and poetic rhythm. His first major-label album, Like Water for Chocolate, was well-received as a commercial success in 2000. In 2003, he won a Grammy for Best R&B Song for the Erykah Badu single, “Love of My Life” featuring himself. His 2005 comeback album, Be, was also a commercial success and earn a 2006 Grammy nomination for Best Rap Album.

Arguably one of the greatest rappers of all-time, Nas has recently become a rapper to look out for in the business world. His debut album, Illmatic, received universal praise upon its release in 1994, and is considered to be one of the greatest Hip-Hop albums of all-time. The album was even inducted into the Library of Congress’s National Recording Registry earlier this year. In 1996, his second album, It Was Written, debuted atop the Billboard 200 and charted for four consecutive weeks, along with its single, “If I Ruled The World” featuring Lauryn Hill.

Jim Jones is one-third of legendary Hip-Hop group, Dipset, and co-CEO of Diplomat Records alongside his longtime friend and fellow Harlem rapper, Cam’ron. In 2004, Jones released his debut solo album, On My Way to Church. The release of his second album, Harlem: Diary of a Summer in 2005, coincided with Jones landing an executive position in A&R at Entertainment One Music, and a year later he dropped his third album, Hustler’s P.O.M.E. (Product of My Environment) that led to his biggest single to date, “We Fly High.”

Between 2007 and 2008, Jones was known for creating the rapper rockstar lifestyle which was very popular at the time. In late 2011, he came up with the idea for a new clothing line and made it official the following year with his brand “Vampire Life,” co-owned by Dame Dash. Jones also appeared on the first two seasons of hit VH1 franchise, Love & Hip Hop: New York. He also earned his own VH1 show, Chrissy & Mr. Jones which followed him and his girlfriend, Chrissy Lampkin. In December 2017, Jones became part owner of the Richmond Roughriders of the American Arena League, and last year he launched Quarantine Studios – a platform that grants aspiring artists access to established music professionals at every point of the industry for a better chance at success.

Weezy F Baby, aka Lil Wayne, was discovered by Birdman and Cash Money Records co-founder Birdman where he became the youngest member of the label at age 12. In 1997, Wayne became member of the Hot Boys with B.G., Juvenile and Turk. Wayne’s 1999 debut album, Tha Block Is Hot, served as his solo breakthrough, and he reached great heights with his studio albums, Tha Carter, Tha Carter II, Tha Carter III, as well as several mixtapes and collaborations years down the line.

Because of his passion for music, Wayne has had the opportunity to set up business ventures in music, skateboarding and fashion. These ventures include his Young Money Entertainment record label, TRUKFIT clothing line, Beats By Dre Pro Headphones, Tunechi Beats, an app called Sqvad Up, Young Money Sports agency, a cigarillos brand called Bogey Cigars, a partnership with French watch brand Wize & Ope and his own shoe line with SUPRA.

Ludacris released his first major label album, Back for the First Time in 2000. The album included his certified-hit singles Southern Hospitality and “What’s Your Fantasy.” In 2001, he released Word of Mouf, followed by Chicken-n-Beer in 2003 and The Red Light District in 2004, all of which were certified multi-platinum albums. As an actor, Ludacris – whose real name is Chris Bridges – is best known for his role in The Fast and the Furious film franchise with his first appearance happening in 2002. His other notable roles include Crash, Gamer and New Year’s Eve.

Ludacris is the founder of his own record label, Disturbing Tha Peace – an imprint distributed by Def Jam Recordings. He’s also the co-owner of Conjure Cognac Liquor. In 2011, he released his own line of headphones called Soul By Ludacris and owns several real estate holdings. In 2006, he appeared in a TV and print advertising campaign for Puma, which released 3 limited edition models of a “Clyde x Luda” Puma Clyde sneaker, with his image on the heel of the insole and “DTP” (for Disturbing tha Peace) on the heel window. In November of 2016, he also opened up a restaurant named “Chicken N Beer” at the Hartsfield-Jackson International Airport in Atlanta.