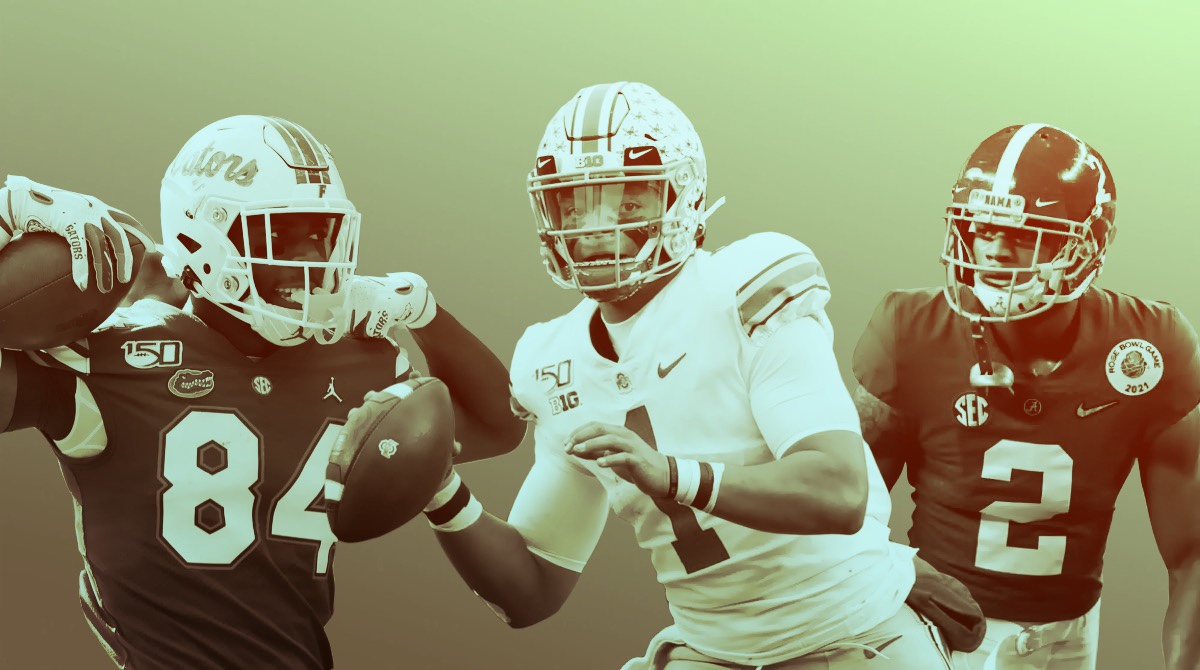 Football fans, rejoice! The 2021 NFL Draft is just one day away and the anticipation is killing us. Front offices are putting the finishing touches on their draft boards and we get to predict what each team is going to do to improve their rosters. After the first two picks, the draft truly begins. Lennie Johnson and myself made our consensus picks for the 1st round of this year’s draft. Let’s see how things played out.

1. Jacksonville Jaguars: QB Trevor Lawrence, Clemson – Jacksonville has been on the clock since week 15 of the 2020 NFL season with an obvious need at the QB position. They draft the highest-graded QB prospect in history — simple.

WWKD? (What would Kyle do?) We are wondering the same thing. If the latest Ian Rapoport report is correct, then Mac Jones is certainly their guy!

4. Atlanta Falcons: TE Kyle Pitts, Florida – Unless the Falcons plan on trading Matt Ryan, they without a doubt get the best skill position player on the board and that’s Kyle Pitts. Hayden Hurst and Kyle Pitts instantly jump into the best TE duo conversation.

5. Cincinnati Bengals: OT Penei Sewell, Oregon – Bengals fans lean right, “PROTECT JOE BURROW.” That’s all you can do with this pick. Ja’Marr Chase is who you want — Sewell is who you need.

6. Miami Dolphins (from Eagles): WR Ja’Marr Chase, LSU – The breadth of Tua’s arsenal continues to widen when they pick the top-graded wide receiver in the draft.

8. Carolina Panthers: OT Rashawn Slater, Northwestern – PFF despised this pick, but it would be abysmal to give up draft capital for Sam Darnold, just to turn and select a QB at 8. Instead, the Panthers grab a perennial blindside protector.

9. Denver Broncos: QB Justin Fields, Ohio State – The Broncos front office decides to go with Justin Fields here, simply because of their lack of faith in Drew Lock. Great for Fields, terrible for Lock because he can ball.

10. Dallas Cowboys: CB Patrick Surtain II, Alabama – The Surtain legacy continues in Dallas, where a reeling defense gets an anchor. Put Surtain on an island and watch him work.

12. Philadelphia Eagles (from Dolphins via 49ers): WR Jaylen Waddle, Alabama – Burner Jaylen Waddle joins up with former teammate Jalen Hurts. Philly will be explosive, and expect Waddle to be the cause of it.

13. Los Angeles Chargers: OT Christian Darrisaw, Virginia Tech – Chargers fans, we are going to tell you the same thing we said to Bengals fans — protect your quarterback. Christian Darrisaw is the powerful obelisk you want to serve in that capacity.

14. Minnesota Vikings: EDGE Kwity Paye, Michigan – At No. 14, the Vikings options are clear – Kwity Paye or Trey Lance. They choose the former since Paye will be an instant impact player for the team on defense.

15. New England Patriots: QB Trey Lance, North Dakota State – New England fans should rejoice if Trey Lance falls into the Patriots lap at 15. Lance hails from a NFL-esque offensive system and gets to learn from Cam Newton for a year. Win-win for the Pats.

17. Las Vegas Raiders: OT Alijah Vera-Tucker, USC – After some questionable moves on the offensive line, the Raiders draft on of the most versatile big men in the class

18. Miami Dolphins: EDGE Jaelan Phillips, Miami (FL) – After taking the best receiver with their first picks, Miami doubles back and grabs arguably the most talented edge rusher in the class.

19. Washington Football Team: LB Jeremiah Owusu-Koramoah, Notre Dame – Owusu-Koramoah is an athletic playmaker who adds yet another dimension to an already scary defense.

22. Tennessee Titans: WR Rashod Bateman, Minnesota – After losing Corey Davis and Jonnu Smith in the offseason, the Titans re-up with a receiver who pairs well with A.J. Brown.

23. New York Jets (from Seahawks): EDGE Jayson Oweh, Penn State – The Jets opt for defense with their second pick and take an uber-athletic edge who is more of a disruptor than a sack artist.

24. Pittsburgh Steelers: RB Najee Harris, Alabama – James Conner is gone and neither Snell nor McFarland are exciting options for an every-down back. Pittsburgh selects the best running back in the class.

25. Jacksonville Jaguars (from Rams): S Trevon Moehrig, TCU – With their second pick, the Jags take a do-it-all safety who can be the quarterback of their defense for years to come.

27. Baltimore Ravens: WR Terrace Marshall Jr., LSU – I’d be shocked if the Ravens don’t take a wide receiver in their first two picks. Marshall has elite speed and gives this offense the touchdown threat it needs.

28. New Orleans Saints: CB Caleb Farley, Virginia Tech – The Saints run to the podium to take Farley, who if not for a back injury, would be a Top-15 pick. Hell of a steal.

29. Green Bay Packers: WR Elijah Moore, Ole Miss – Packers fans finally get their wish, as they draft a WR — one with great explosiveness and playmaking ability from the slot.

30. Buffalo Bills: RB Travis Etienne, Clemson – The Bills are built to compete for a Super Bowl. Adding a dynamic home run hitter like Etienne makes them even more dangerous.

31. Baltimore Ravens (from Chiefs): OT Teven Jenkins, Oklahoma State – EDC shifts his focus to protecting Lamar Jackson and takes Jenkins, a versatile big fella who can play either tackle or guard in the NFL.

32. Tampa Bay Buccaneers: EDGE Gregory Rousseau, Miami (FL) – This is a luxury pick for the defending champs. It’s been a while since we’ve seen Rousseau play but he has a high ceiling and J.P.P. is on the tail end of his prime.