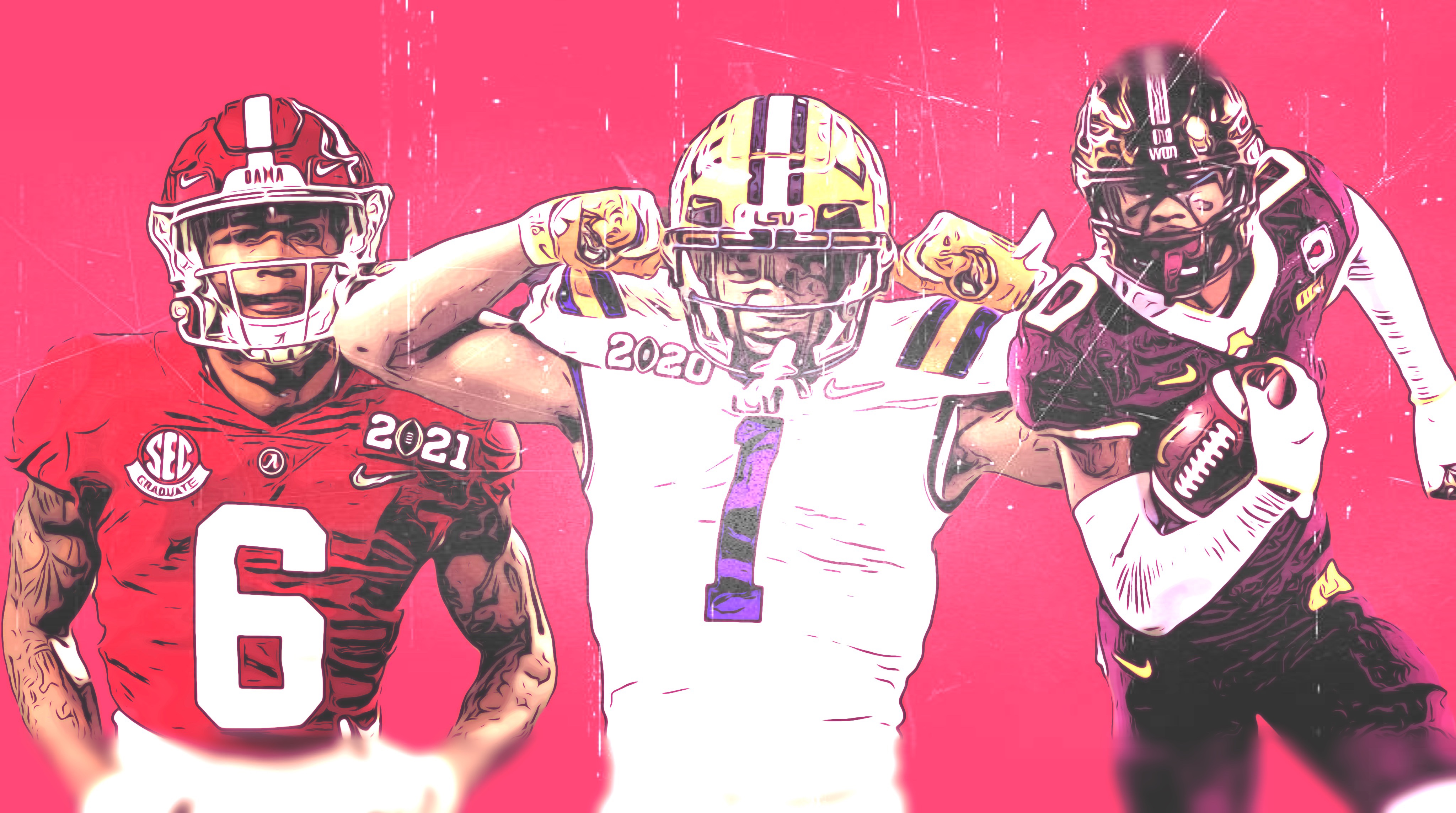 Each year, the NFL brings in a new crop of young talented wide receivers. However, the 2021 NFL Draft features a class of pass-catchers that has the potential to be really special. Every year, there are a least a few names that people are excited about. However, the 2021 draft class is deep and there’s a lot of upside when you analyze the list of prospects.

Before we dive into this year’s WR class, let’s take a look at some of the most talented classes from past drafts.

The 1996 NFL Draft was overflowing with talent at the wide receiver position. Keyshawn Johnson was taken with the No. 1 overall pick, out of USC. He enjoyed a solid NFL career, nabbing 814 receptions for 10,571 yards and 64 touchdowns. The headliner of the class turned out to be Chattanooga’s Terrell Owens. Owens was a 6-time Pro Bowler, 5-time All-Pro selection and was recently inducted to the Pro Football Hall of Fame. T.O. currently ranks 3rd all-time in receiving yards and touchdowns. Marvin Harrison is the only other Hall of Famer from this class. He was selected to eight Pro Bowls and ranks top 10 in receiving yards and TDs. Muhammad, Horn, Moulds, Toomer and Glenn also enjoyed productive careers.

The potential of this class hasn’t been fully reached, but it is easily one of the top groups in recent memory. Odell Beckham Jr. hit the ground running with three straight 1,300+ yard and double-digit touchdown seasons with the Giants. Davante Adams is now widely regarded as one of the top 5 wideouts in the league today. Mike Evans has amassed 1,000 yards in each of his seven seasons.  When healthy, Robinson, Cooks and Landry have each proven to be legitimate threats. Sammy Watkins hasn’t lived up to the hype, but the rest of the top names from 2014 class have enjoyed very productive careers to this point.

The 1988 WR class may not be as deep as the two that were previously discussed, but at the top, there was some elite talent. Michael Irvin lived up to the bill of being selected No. 11 overall by the Dallas Cowboys. He had a Hall of Fame career, recording 750 receptions for 11,904 yards and 65 touchdowns. He also helped Dallas to three Super Bowls. Tim Brown was a model of consistency over his 17-year career. He racked up 1,094 receptions for 14,934 yards and 100 touchdowns. Talk about production for the 9-time Pro Bowler. Sterling Sharpe was well on his way to Canton, before his career was cut short due to injury. He made the Pro Bowl five out of his seven seasons. Sharpe finished with 8,134 yards and 65 touchdowns, which is insane for such a short career.

The 2021 had some certified dogs. Reggie Wayne and Steve Smith Sr. are bound to be in the Hall of Fame some day. Wayne spent his entire career with the Indianapolis Colts and he was one of Peyton Manning’s favorite targets over the years. Wayne enjoyed eight seasons of 1,000 yards or more and finished his career with 82 touchdowns. He was selected to the Pro Bowl six times. Smith Sr. played with such a mean streak despite his size. He amassed 1,031 receptions for 14,731 yards and 81 scores. Chad Johnson was one of the most fun players I’ve ever watched play — before, during and after the play. He played 11 seasons and made the Pro Bowl six of them. Chambers, Moss and Houshmandzadeh each had underrated, yet very productive NFL careers as well.

I know there’s plenty of pre-draft hype about this wide receiver class, but it undoubtedly has the potential to be really special. Let’s take a look at some of the biggest names this group has to offer.

Ja’Marr Chase is the highest-graded receiver in the 2021 class, and it’s honestly not hard to see why. He opted out last season, but we didn’t forget how dominant he was as Joe Burrow’s top target in the explosive LSU offense from 2019. He set the single-season SEC records for receiving yards and touchdowns as a sophomore. Chase is smooth, yet explosive. He has fantastic ball skills and is a bonafide playmaker. In his mind, there’s no one that can guard him and that supreme confidence can make him a special player from Day 1.

If the Heisman Trophy winner doesn’t have the highest grade, you know you have a talented group on your hands. DeVonta Smith did nothing but ball out during his career at Alabama. He’s an effortless route-runner and can make a defender look silly. Smith can line up anywhere on the field and go to work. The only knock on him is his 6-foot, 170-pound frame. Teams may shy away from him because of that, but Smith is physical and he works hard, so I wouldn’t worry about it. I firmly believe he has the ability to make the teams that pass up on him pay.

Before he went down to injury, Jaylen Waddle was the most talked about wideout in the Alabama locker room. He has game-breaker written all over him. Waddle possesses top-end speed, making him a matchup nightmare for opposing defenses. He’s not just a speedster, though. He is also very polished as a route runner, and much stronger than his size would suggest. One play can change the entire complexion of a game and for that reason, it would not be surprising at all if Waddle was the second receiver to come of the board on Thursday night.

Rashod Bateman projects as a great fit for a team looking to select a receiver to line up on the outside. He possesses a desirable combination of size and speed. He doesn’t have elite burst, but he makes up for some of his deficiencies with crisp route running. He has reliable hands and is no stranger to contested circus catches. Bateman will also need to be more physical against NFL corners, but he does have the tools to be a productive starter as some point.

Best of the Rest

We could go on for days with this draft class — it’s that deep. Rondale Moore is an undersized receiver who does his best work in the slot. His speed and elusiveness will make him a valuable asset to an NFL offense. Kadarius Toney is another slot receiver who will absolutely make you pay after the catch. He quickly gets in and out of cuts and plays bigger than he really is. Elijah Moore is an above average athlete who can put defenders in a blender with his route-running. In the right system, he could thrive. Terrace Marshall Jr. isn’t as high on boards as he should be. Marshall has an elite size and speed combo. He can win 50-50 balls and has the wheels to take it to the house at any time. If he locks in, he has the tools to be one of the best to come out of the 2021 class. We didn’t even mention Kyle Pitts, who is a tight end with the skills of a wide receiver. As I stated before, this class is special.