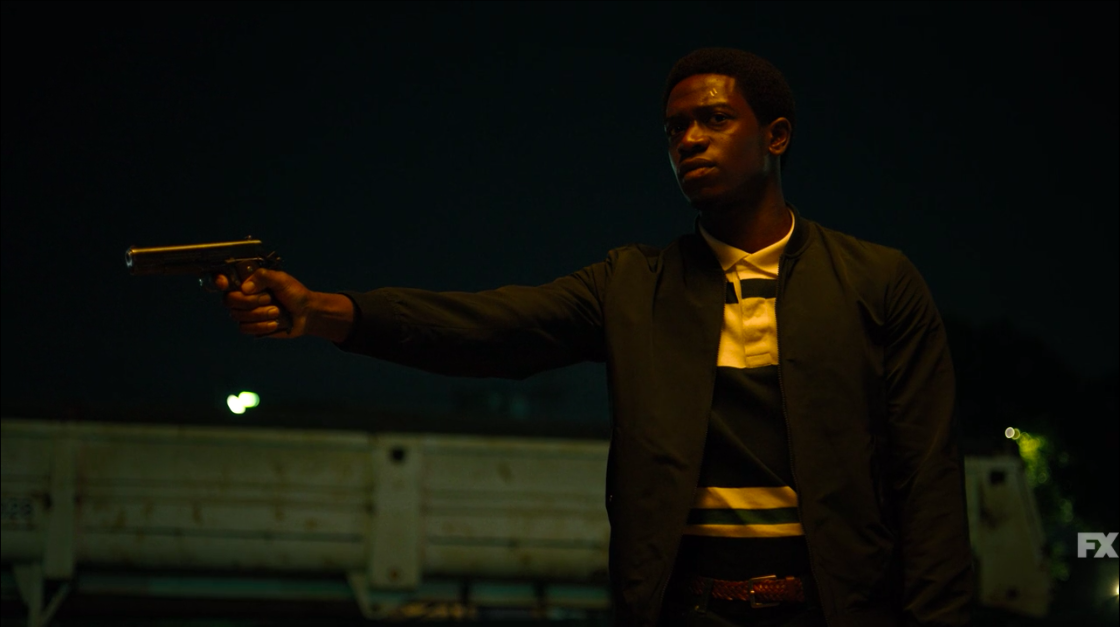 Over the last four years, FX’s Snowfall has easily become must-see TV as it chronicles the story of “how crack began” in South Central, Los Angeles by way of the CIA. In its fourth season, everything happening between the CIA and Franklin Saint’s massive drug operation comes to a complete-halt after both parties are exposed by nosy Los Angeles Herald Examiner reporter, Irene Abe. In the midst of this, we also see Franklin and his crew’s failed attempt at squashing the beef between Skully and Manyboy setting both of them up to get killed, which ultimately sparked a full-on street war.

Snowfall capped off an intense season this week with an explosive finale episode that peeled the final layers of the plot going on between Saint and his crew, his family, Skully and Reed. What started with a violent war in the beginning of the season has crumbled into nothing more than a high body count and lives left destroyed from everyone’s selfish, brutal ways. With every character either dead or at complete odds with each other in a jaw-dropping cliffhanger, we’re all left to wonder the fate of the Saint operation and what’s to come for season 5.

In case you missed it or need a quick summary before heading into the episode, check out our top 10 most shocking moments from Snowfall’s season 4 finale:

At the start of the finale, we get a flashback to a memory from Franklin’s childhood in which his father is called up to his school to explain why his son didn’t stand for the pledge of allegiance. After confirming that he told Franklin not to stand for the flag, Alton then assured his teachers Franklin wouldn’t be returning to school. Towards the end of the flashback, we see Alton promising Franklin that he’d always love and support him, no matter what.

As it flashes back to present day, Franklin is hit with the stark reality that he and his father are now on opposing sides too stubborn to change their minds. One is too preoccupied with trying to salvage his failing drug operation and the other is hellbent on saving his neighborhood and his family.

Khadijah’s death wakes up the beast in Skully again.

Episode 9 concluded with Jerome putting an end to Khadijah’s rage once and for all. As soon as a then grieving Skully got word of her death, he dropped the simping act and finally woke up back in beast mode. He lost his daughter and girlfriend to Franklin and his crew, so the only thing left for him to do was avenge their deaths by any means necessary.

Franklin and Alton fallout then team up to kill Skully.

Alton’s snitching days didn’t end once Irene was killed by Reed. He went back to the radio station to air out his grievances about the CIA’s shady operation and went on to reveal Reed’s fake identity as a member of the CIA. Alton was clearly on a mission to expose the organization for what it had done to South Central and he wasn’t stopping until Franklin set up a meeting with him and Reed.

After Franklin finally gets ahold of Alton at home, they get into a brief spat where Saint refuses to be the middle man in his father’s CIA drama. In short, he tells Alton to pack his sh*t and leave town for good. However, their conversation is cut short because an angry Skully is of course at the door and out for blood. They get into a brief shootout with him where Alton ends up hitting Skully, but the latter shoots back and gets Alton before making his escape.

Afterwards, Franklin offers to take Alton to the hospital to treat his wound, but once again Alton is too resistant to listen to Franklin. Franklin still going against his father’s advice about leaving the crack game alone later gets hit over the head by Alton, who then steals Saint’s pager to get Reed’s info.

Alton goes after Reed and the CIA in a three-man showdown.

Alton finally meets up with Reed at a mutual location where they both square-off with guns in hand ready to take each other out. Alton insists that the entire crack game is Reed’s fault, while Reed counters that it was in fact Franklin’s idea to sell drugs in the first place.

Suddenly, Franklin pulls up with his mom, Cissy, where they both try to play peacemaker between the two. Somehow Franklin is forced to draw his gun, but Cissy jumps in and is able to finally talk everyone off the ledge before they start shooting. After assuring Reed that she and Alton would flee to Cuba and stay quiet about the drug business, Reed lets them go – for now.

Jerome finishes off Skully before he can get to Louie.

A wounded Skully is still out to rid himself of Saint’s crew and his next target is a hospitalized Louie. While threatening to kill Louie in the hospital for not giving up Franklin’s whereabouts (as he continues to bleed out), she manages to talk him down a bit warning him that killing them off wouldn’t end his tormented cycle of pain.

After letting his guard down just enough to lower his gun, Jerome jumps up and tackles him to the ground. Skully, still suffering from his gunshot wound from Alton, is too weak to fight back and ultimately dies on the hospital floor – finally finishing off the remainder of the Inglewood crew.

Cissy and Alton part ways with the drug game and flee to Cuba.

As promised, Cissy and Alton are put on a jet to flee the country and hide out in Cuba for good. Alton tries one final attempt to tell Franklin he’s sorry for all the mistakes he’s made and tells him that he loves him. In his final goodbye to his mom, Franklin sheds a few tears with Cissy as they part ways with a long, heartbreaking hug.

Cissy and Alton finally board the plane and Franklin and Reed watch it as it takes off. A later scene then cuts to Alton and Cissy as we get a glimpse of their new, peaceful life in Cuba.

Louie and Jerome pull a power move against the family.

Louie is finally out of the hospital and Franklin welcomes her and Jerome back with opens arms and smiles thinking things are back to business as usual – or so he thought. Instead, Louie and Jerome hit Franklin with a proposition that they plan to go into business for themselves, but are willing to still buy his product at a higher price tag.

We’ve witnessed how Franklin’s business dealings have gone awry over the course of the season, and Louie and Jerome are finally taking a stand against him. Though their decision left Franklin devastated and down to little to no crew, it looks like we’ll be seeing these two in charge of their own operation next season.

Leon breaks the news that he wants out too.

As if things weren’t bad enough losing Louie and Jerome, Leon tells Saint that he wants out of his drug game too – and this time he’s stepping away for good. Still reeling from trauma of killing Khadijah’s daughter, it’s clear Leon is not the same cutthroat right-hand man he was before.

Franklin refuses to accept this after everything he sacrificed to save Leon’s life and keep him out of harm’s way. Clearly in denial, Franklin shrugs off his request and insists that he’s simply going to get Louie and Jerome back so they can all “be a family again.”

Reed doubles back to finish off Alton.

As soon as Alton thought he was in the clear in Cuba, Reed came creeping through the crib like a thief in the day. Though Alton was shocked to see him sitting in the entryway of his suite, gun in hand, he was unfazed by his arrival.

As he puts his book down (which is not-so coincidentally “The Spook Who Sat By the Door”), he urges Reed to understand his place in the world before he meets his end. He then turns his back to accept his fatal fate.

Franklin pops up on Mel to let her know Irene’s dead.

While things in South Central have gone haywire, Franklin’s former lover Mel has been living comfortably in Texas still healing from her father’s murder and shooting Franklin. Just when she thought she escaped her past, Franklin pops up on her at church uttering a simple, “Hey Mel.” Mel, spooked by his sudden appearance (comparable to the demeanor of The Wire’s Omar), is confused as to why Franklin has decided to pay her a visit out the blue.

He reveals Irene’s death to her as she indirectly played a part in her murder since she ratted him out to the paper. He warns her that since Irene is dead, she should get anything else she’s been holding onto off her “little” chest because it’s her last chance to come clean. A shaken Mel then asked him to admit to killing her father, and Franklin of course slyly ignores her. Just when we all thought Franklin was going to put a bullet through her head, he does the COMPLETE opposite and says, “goodbye Mel, take care of yourself.”

In the show’s final scene, we watch as Franklin slowly walks away before he pauses to put his cane down, the cane he’s been sporting all season long. Finally, he walks out of the church unfazed and without his usual limp. Possibly signaling that crippled Franklin is gone and Saint is back in full effect next season.

TT The Artist’s ‘Dark City: Beneath The Beat’ is Putting More Eyes On Baltimore Club Music and the City’s Creatives