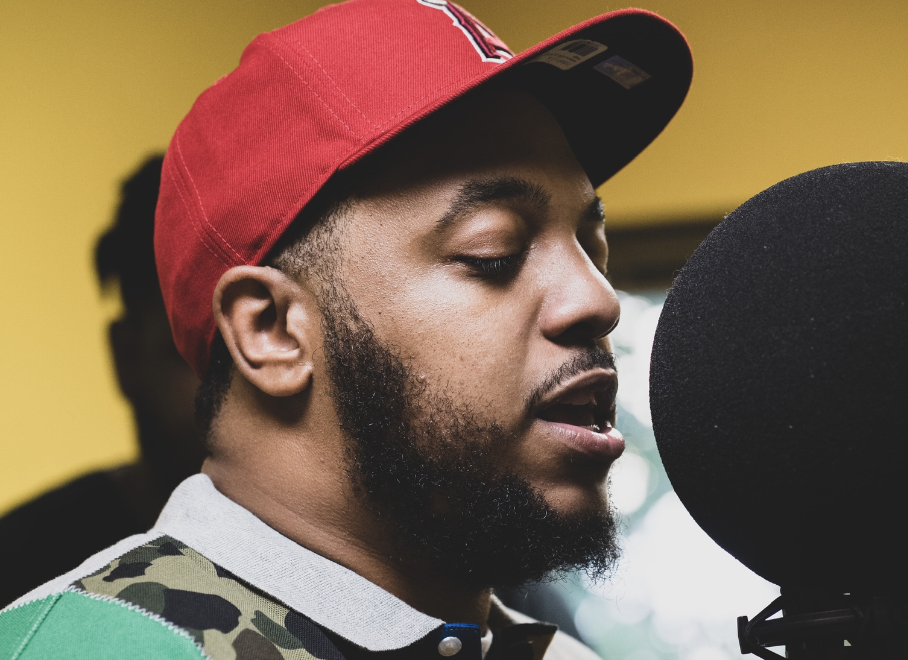 Mack SZN is in full effect and this year the Baltimore artist is setting the bar high.

Growing up as a kid, Mack Scott always had a thing for music. Over the years, he’s been able to manifest that passion into a lively career that’s set him up for success in Baltimore’s music scene. Fresh off of snagging two Hometeam Honors awards for Best Rap Album and Lyricist of the Year, Mack Scott is feeling a renewed sense of confidence in his music. “It feels good honestly,” he shares about his wins after making an internal pledge last January to stop holding himself back. “I feel like I’ve just kind of started to begin to show how I really get down forreal, so for me to make that commitment for myself and get that recognition for it, it feels real good.”

couldn’t be more thankful for the recognition I received this weekend in two super tough & competitive categories. Thank you to everybody who supports me in whatever capacity. Back to work 🏀🖤🏆 pic.twitter.com/qeslAiDzXQ

When Mack first started rapping with his older cousin at age 13, he knew music would always be in his future. Unlike other Baltimore artists who share that similar gritty sound, Mack credits his listening rotation of artists like 50 Cent, Dipset, The Lox, UGK, Outkast, and others for shaping his out-of-the-box style. “My sound is encapsulated from a lot of what I was listening to when I was that age,” he shared. “I’m really cut different. My older brother is one of the Baltimore underground legends (Mike Malachi), so I was in studio sessions with people like Skarr Akbar, Greenspan, and all those people from the older generation of Baltimore underground who was really wyling. Like I was 12, 13, 14 sitting in the studio watching them n*ggas snap, so my perspective of what a Baltimore rapper sounds like is completely different.” For Mack, his interest didn’t lie in the melodic rap lane, but more so with those whose style was “straight rap, straight bars, and straight swordplay,” as he would say.

His finesse for lifestyle rap is a culmination of his real-life experiences wrapped up in his skill as a lyricist – a title he doesn’t take lightly. “There’s a difference between being able to rap and being a lyricist,” said Mack. “I was bred to be a writer and from that I was able to pull from the education that I got, the life that I lived, and the people I surrounded myself with – I’m just different. What separates me is that I’m simply just not like nobody else and I’m able to show that in my music.” Mack – who’s been releasing music for over four years now – knows his way around a pen and a microphone, but has remained fairly quiet on the music scene but that’s quickly changed over the last year. Though he refers to himself as “the best kept secret” in the city, he’s got a few tricks up his sleeve to make sure everyone knows exactly who he is as an artist.

A blessing in disguise for him was the quarantine lockdown brought on by the pandemic, which forced him to sit still and dive deep back into his music. For many artists, the mass shutdowns were a confusing time with live shows no longer being an option, but that didn’t stop Mack from following through with his game plan – if anything it worked better in his favor. “I was in the crib all day so that gave me time to not only work on music, but work on myself,” he shared. “I think that I’ve been able to improve at the rate that I’ve improved because I got to spend that time working on synchronizing my mind, body, and spirit and that really made the product what it was.”

“To be honest, Free Mack is far from perfect but it was the first time I said ‘f**k that, let’s just make something.'”

The product he referred to is his latest project, Free Mack – an album he crafted to cure his quarantine depression and lift others’ spirits during such a crazy time. “Free Mack was kind of like my pick-me-up because we was really in that crib. So I wanted to make something to make people stuck in the crib feel good, that was the goal,” he said. “I didn’t set out to say I’m going to have the best album in the city this year, I just wanted to make myself and the people who listen to it feel better. Free Mack was more so to establish myself as a mainstay, so [in doing that] I just wanted to let n*ggas know I was here and I’m not going nowhere.” The project – which came together in 2 short weeks – was Mack’s way of letting go of his perfectionist trait and allowing his creativity to flow freely to record his best body of work to date. “It felt good to be able to do that,” he said, “just to know that if I let go of putting the pressure on myself I can make some things happen so the [pandemic] was a blessing.”

“That’s how I wanted people to receive Free Mack. I wanted them to know that I’m going to be here and you’re just going to have to deal with it.”

Aside from creating his award-winning album, Mack also spent his time in quarantine building out his home studio – a passion project he takes much pride in. Between teaching himself how to make beats on an iPad and watching YouTube tutorials figuring out the right equipment to purchase, Mack was on a mission to become a fully independent artist in every sense of the phrase. Outside of just learning a new skill to add to his craft, Mack also wanted to teach himself the engineering game to ramp up the volume at which he was making music. Thus, turning himself into both a seasoned artist and jack of all trades. “At this point, my output has gotten too big to have to wait for an engineer, so I’ve started to teach myself how to mix and master just to keep the wheels rolling,” he revealed. “Now I’m finally at the point where I’m not sacrificing any quality recording in the crib. I’m at that point now where I’m 100% self-sufficient and I feel great about it because it’s been a long journey to get here.”

Like many other artists in the city, Mack is itching to get back on stage and perform all his newly-released music for fans, both old and new. “I miss being with the people,” he shared, “I miss spotting someone random I’ve never seen before in the crowd Harlem shaking when I perform “Streetlight.” Mack was just getting back to performing live again before the pandemic hit, but his return should be a grand occasion with what he has in store. His latest drop, “Line in the Sand,” was a reminder for anyone who forgot that he’s not an artist to play with, especially when you talk about going toe-to-toe with one of Baltimore’s most talented writers. “I just felt like it was too much going on, things were getting too comfortable,” Mack recalled a tweet that revived the friendly, yet heated competition among Baltimore’s crop of rappers. “Everybody, whether they were really good or really bad, had an opinion. So I was like, y’all stay over there and this is me here,” he says as he physically draws a line on the table.

Looking ahead, Mack is aiming to release his next project this July but not before he releases something special to celebrate his Hometeam Honors win. Because Free Mack won Best Rap Album, Mack reveals that he plans to drop a deluxe version next month with “some of the extra songs that didn’t make the cut.” The five bonus tracks added to the project will include features from fellow Baltimore artists Finagobaby and Shwaze Collins. As far as next year’s Hometeam Honors ceremony goes, Mack has his heart set on taking the crown for Best Rap Artist.

Like Loading...
In this article:baltimore artist, Best Rap Album, Free Mack, Hometeam Honors, Lyricist of the Year, Mack Scott
Up Next: