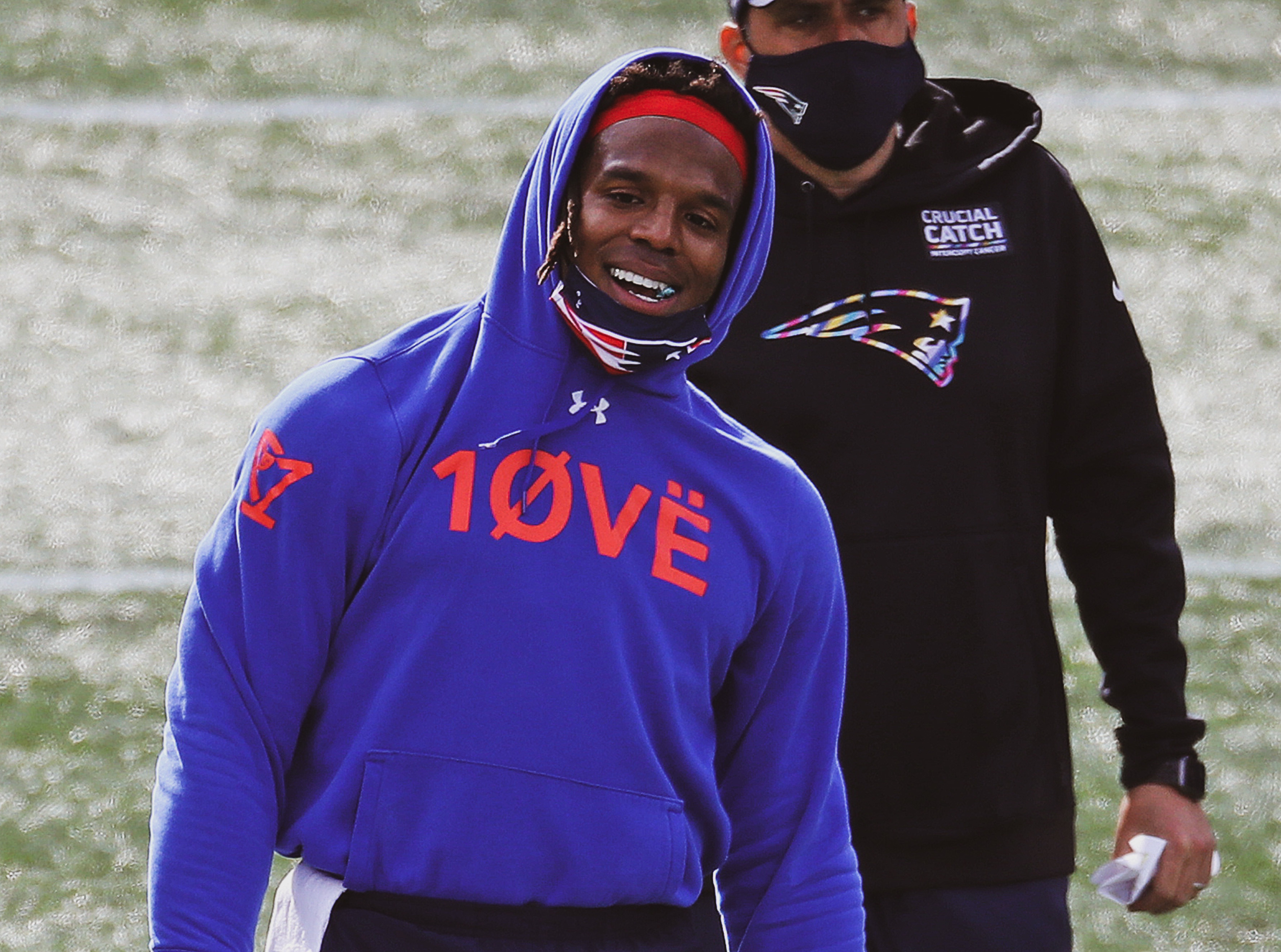 Foxborough MA: 10-18-20: Patriotys quarterback Cam Newton flashes a smile as he was warming up before the game. The New England Patriots hosted the Denver Broncos in a regular season NFL football game at Gillette Stadium. (Jim Davis/Globe Staff)

There’s an old saying called “Respect your elders”, a term that is used for the younger generation to learn how to respect their much older generation in front of them. For example, your Moms or Pops would always tell you how showing respect can lead you in the right way.

Even that term is re-phrased in the bible (Leviticus 19:32) to show the longevity of this quote in generations of families. While the term still holds use in today’s society some may not have learned the meaning behind the phrase, which shows its ugly head in unnecessary situations.

A video surfaced on social media platforms yesterday showing a high school football recruit Jseth Owens heckling New England Patriots quarterback, Cam Newton at his annual football camp. In the video, Owens was shouting phrases like “you ass”, “you’re a free agent”, and “You about to be poor” towards the All-Pro quarterback. Newton replied back saying “I’m rich” to Owens’ taunts and he repeatedly asks for the recruit’s parents while the argument continues.

The video clip went viral with many criticizing Owens for showing a lack of respect towards the former NFL MVP. Current and former NFL players such as Leonard Fournette, Shannon Sharpe, Eric Ebron, and Patrick Peterson also shared their thoughts on the video.

Later in the day, another video was posted of the quarterback having a one on one conservation with Ownes, trying to mend the situation between them and give the young recruit some advice for the future. Newton posted the video on his official Instagram page with a caption.

“I have given my time, my energy, and my expertise to these kids coming into our program for over 11 years and that is not what people want to hear or even want to see…” said Newton. “People want to see me arguing with another young man to see me get in my feelings….but the truth is this, I impact kids lives in a positive way, make no mistake about it allow kids to realize their “out”, by using their football talents to get them to the next level and in most cases…Out of the Hood.”

Owens posted a statement on his Twitter page Monday morning apologizing for his actions in the video. “I realize this can dictate my future as a young man having very big dreams/goals but I will not allow this to stop me from getting where I need to be,” he said. “So again, I apologize & hope I can be forgiven.”

Back to the “Respect your elders” quote, with the influence of social media in today’s society, many use their platforms to spread hate or bullying people who they don’t even know. This is very present in the sports Twitter world where fans often tweet or message vulgar remarks to professional athletes, knowing they won’t get any trouble for it.

For example, Green Bay Packers wide receiver Marquez Valdes-Scantling tweeted last November that he received death threats from fans after a costly fumble late in the fourth quarter, which eventually led to a loss against the Indianapolis Colts. The same incident also happened with Philadelphia 76ers guard Danny Green when fans attacked him and his fiancee on social media after missing crucial buckets in last year’s NBA Finals.

In Owens’ case, he felt he could get away with saying those comments to Cam Newton without facing any repercussions for it since social media made it normal to harass others. But with the negative backlash that came with it, Owens knew he made a mistake. Fortunately in Owens’ case, Cam Newton took the public jabs lightly and offered to help the young man learn from this situation.

Newton, who is a generational talent at his position has been charitable throughout his NFL career by having annual football camps, being a motivational speaker, and creating his own foundation where he has a profound effect on the black community. Newton has been criticized on numerous occasions by the media and fans during his career but his philanthropy always speaks the loudest showing he may not be the most perfect person but is willing to share with the younger generation what’s right and wrong.

While the backlash on social media was harsh to criticize Owens’ for not being raised right” or “lacking respect for others”, For Newton to give the young HS recruit a “teachable moment” at his football camp — showing at the right moment, that respect for others can be truly earned.