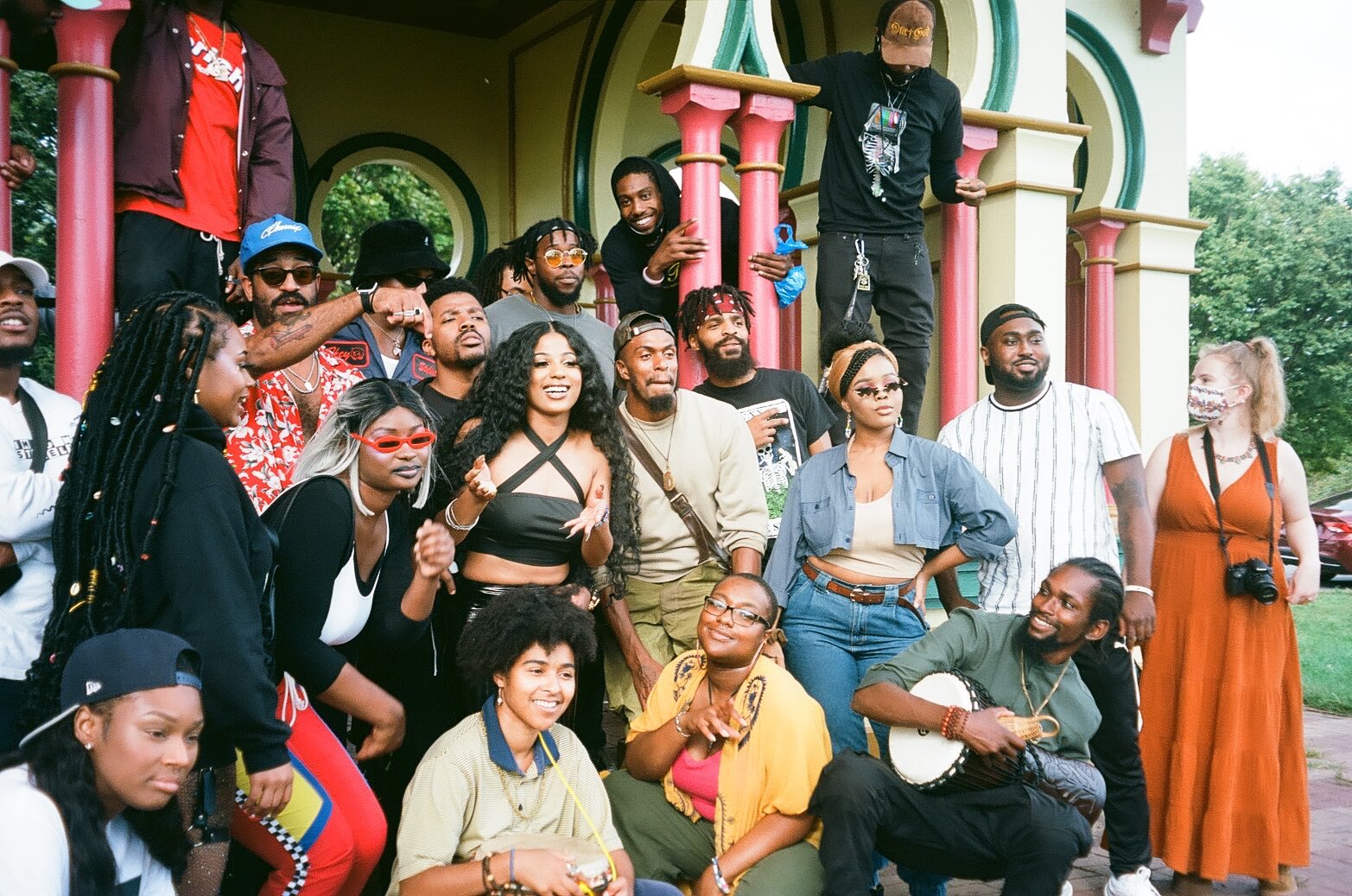 For years, Central Baltimore – also known as the DIY scene – has been the birthplace of some of the most fascinating and gifted individuals from the city. From over East to the West side and every corner of the city’s artsy grounds, all artists from the underground scene have come together to create an alternative style opposite of Baltimore’s harsh and gritty street reputation.

The DIY scene has been a relatively secret part of Baltimore to those who aren’t privy to what’s been bubbling beneath the surface, but this active crowd has been putting in work for nearly a decade to rebel against the status quo. Unlike the average street dudes hustling to make it out of the city, Baltimore’s artsy cliques have a distinct mission to revitalize the city’s culture and put it on the map by taking matters into their own hands. True to the city’s spirit, Baltimore’s eclectic group of artists are no longer waiting for record labels, the music industry at-large, and other famed individuals to give them a hand out – we’re all about making things happen for ourselves.

“What’s happening in Baltimore now is n*ggas is just tired. Tired of feeling like the music we are making is falling on deaf ears, n*ggas just want to be heard. One of the most coveted positions in modern society is being an artist, so why doesn’t one of the most renowned cities in the world have a representative on the main stage? The past generation didn’t have the answers and we’re not goin for that no more.” – The Holy Karon

The traditional monthly debate that boils over every so often online revisits the same issue we have yet to solve – what is Baltimore missing? The loaded question has a multitude of answers that justifies what people from the city believe we lack compared to other hyper-fixated cities like Atlanta, New York, and Los Angeles that are considered the nation’s top creative hubs. According to rapper and artist Finagobaby, without the proper layout Baltimore has no choice but to make things happen on our own. “What an industry does is almost serve as leadership,” he said. “If you don’t have leadership to put people together, put money behind certain projects, or connect them with higher-up sources, you can only get but so far. Everything we’re doing we’re doing ourselves, which is actually a gift and a curse.” Similarly, artist and media personality Score Swayze echoed the same sentiment, alluding to that fact that the city’s lack of infrastructure is hurting our ability to break through the glass ceiling and alter the path every other local artist has previously followed. “Until we disrupt that entire ecosystem, we’re going to have that same argument every month,” he declared. “We have to destroy the infrastructure that we have now, or lack thereof, and build anew.” Everything from a lack of proper groundwork to much-needed support has lent a hand in Baltimore’s preceding status, but what’s on the horizon for the city has the power to change our future for the better.

“This reflects what’s happening in the world now. If you look around a lot of artists are going independent now and labels aren’t really all the way necessary, the whole world is almost doing it’s own thing.” – Finagobaby

The great Black cultural migration that most closely resembles our time is the Harlem Renaissance – better known as the social and artistic explosion that occurred in Harlem, NY back in the early 20th century. Considered the golden age of all things vital to Black culture back then, this time period manifested a blazing movement that spanned across art, music, fashion, literature, and theater. Up until now, who knew when we would ever see another pivotal moment in time such as the aforementioned that redefined an entire generation of creativity. Well, the time has finally come upon us for Baltimore to fill that position and claim its rightful moment in history. This declaration may seem exaggerated to some, but compared to years prior, Baltimore over the last decade has experienced a resurgence like never before with a whole new genesis of artists ready to take the world by storm. Those who have been hip to the scene know exactly how slept on the city has been, but recent increased attention from outsiders has brought a new sense of notoriety to Baltimore. From music to fashion to art and more, Baltimore’s vibrant renaissance has been happening for years only now the world is just waking up.

Every renaissance period has its game-changers, but the prominent figures like those involved in the Baltimore’s art scene are the ones who deserve credit for what we’re witnessing today. People like Butch Dawson – alongside his Basement Rap crew – have been some of the most consistent forces in pushing Central Baltimore’s culture forward. His blueprint has helped other up-and-coming acts today better navigate the space in a way that has resulted in upward growth in their careers. Other major playmakers like Al Rogers Jr. and Qué Pequeño have also played pivotal roles both at the forefront and behind-the-scenes of Baltimore’s underground culture. The collaborative relationships they’ve forged with artists like Miss Kam, Chris Cassius, Zadia, and others has all been in an effort to help put Baltimore on the map now and forever.

Despite the lack of OGs around to pass down those missing insights, our current generation does its best to make do with what they have. “We don’t have a lot of people from previous generations passing greatness down from one person to the next so that we can actually bring them into the pipeline of making music,” Qué told The 4th Quarter. “A lot of things have to be DIY, come from the young n*ggas, and even people like myself who are working as much as we can by themselves or with a team of people/ friends making it work however they can.” Prior to 2020, he claims the creative scene has started to see a lot more synergy between the art crowd and everyone else in the city, and now music artists who are taking their careers seriously are finally beginning to see the fruits of their labor. From these authoritative leaders down to younger artists in the city, they’re all preaching the gospel of the importance of Baltimore artists preserving their masters and learning how to make their music profitable in order to sustain a livelihood in the creative space. Most of all, they’re proving that there’s no one way to stand out – everybody has their own style that makes them special.

“They don’t have to be one type of person, there are hella faces of Baltimore as far as the scene and there’s a whole underground scene that a lot of people don’t know about.” – Deetranada

On top of this unique creative period the city is living through right now, artists are not only flourishing in their respective lanes as individuals, they’re also coming together in a way we haven’t seen since as recent as 2015. “We’ve always been a very collaborative city, but now it’s just next level,” said Bobby Woody, a local artist, audio engineer, and event curator. Witnessing the city’s growth first hand, Woody as well as others are in awe of the long overdue come up Baltimore has been on. “I think that the artists in the city are doing a great job at keeping the buzz up and promoting themselves,” said up-and-coming femcee WhoCamille, who describes the scene as thriving. “People are going crazy with the creative waves they’re making.” In previous years, we had the best of the best like late artists MikeySavage and Dee Dave – considered beloved stepping stones in Baltimore’s music scene – putting in the hard work to build this city up in ways we could’ve never imagined. Although Baltimore’s underground scene is not a new phenomenon to the city, the world may think otherwise now that social media has come into play. According to budding music artist THEBLCKGIN, social media has grown to become more of a business and asset for Baltimore’s newest acts to use in an effort to boost their work. “Four years ago, social media wasn’t what it is now. You weren’t getting opportunities off of social media, people were just seeing you.” Thanks to the power of these platforms like Twitter, Instagram, Clubhouse, etc., Baltimore’s slew of up next artists have more eyes on them now than ever before and it’s working wonders for the city’s rising influence. 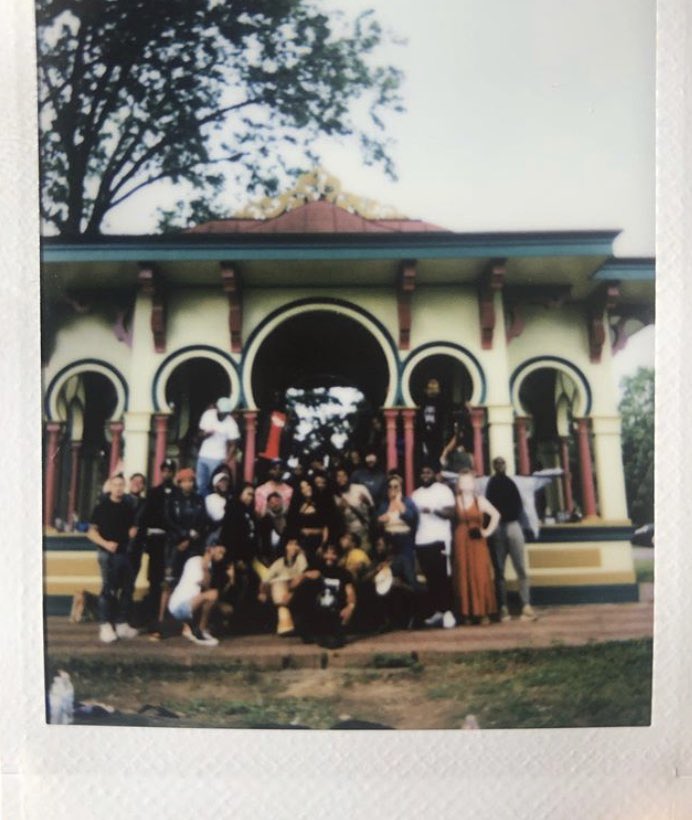 Compared to what the DIY scene looked like ten years ago, there’s now is a running list of artists in Baltimore changing it to where we’re making noise outside of these battered city streets. We have artists and creators stepping up to become the voice of the voiceless because they genuinely want to see the city as a whole prosper. “Everybody’s soaring right now. There’s so many different types of art being shared in different ways,” Deetranada shared with The 4th Quarter. “I f**k with how we’re not on, on, on yet, but everybody’s starting to look. I see the conversations on social media and a lot of people are looking at Baltimore, more than we think. I really think this is our year.” To her, the DIY title is more than just a label for a section of the city, it speaks to Baltimore’s character and what we’re striving to accomplish through our art. “When people ask what sound do we have, I feel like Baltimore just sounds like originality. We have so much versatility as far as the whole city, but in a way you still know where we from because you hear it in our voice. Other cities are identified by their beats, but we’re identified by the strength in our voices.”

Baltimore – and not just the central part of the city – is the very definition of DIY through and through. We don’t just talk about what we want to do, we go out and get it out the mud ourselves, no outside help needed. Regional support aside, we have all the tools we need to put this city together, we just have to keep pushing forward. “It’s not entirely the fault of people who don’t support each other because we don’t know that we’re supposed to,” said Qué. “But that is the stuff that it’s going to take, we just have to figure it out and make the connection so we can actually start doing that.”

This city is full of talented people like artists T. Ali, Brandon Woody, Kay L.A., Doowy Lloh, Kotic Couture, YTK, Baby Kahlo, Mack Scott, Shwaze Collins, and many more making things shake on the music side. Then you have creators like clothing designer Akilé and the entire Finagopark camp (Finagobaby, Score Swayze, Benjamin Banger, Burnout, L Busy, Descentive, Talk2nobody, The Gxod Fellas) learning all sides of their crafts to become self-made entities running their own creative operations, respectively. And you can’t forget our culture’s commentators like The Working Title Podcast and Lawrence Burney as well as visual artists Devin Allen and Shan Wallace who are documenting the city’s history in real-time as it’s happening right before our very eyes. Baltimore has the world in the palm of its hands right now, so the time for the city’s creative scene to break out is now.