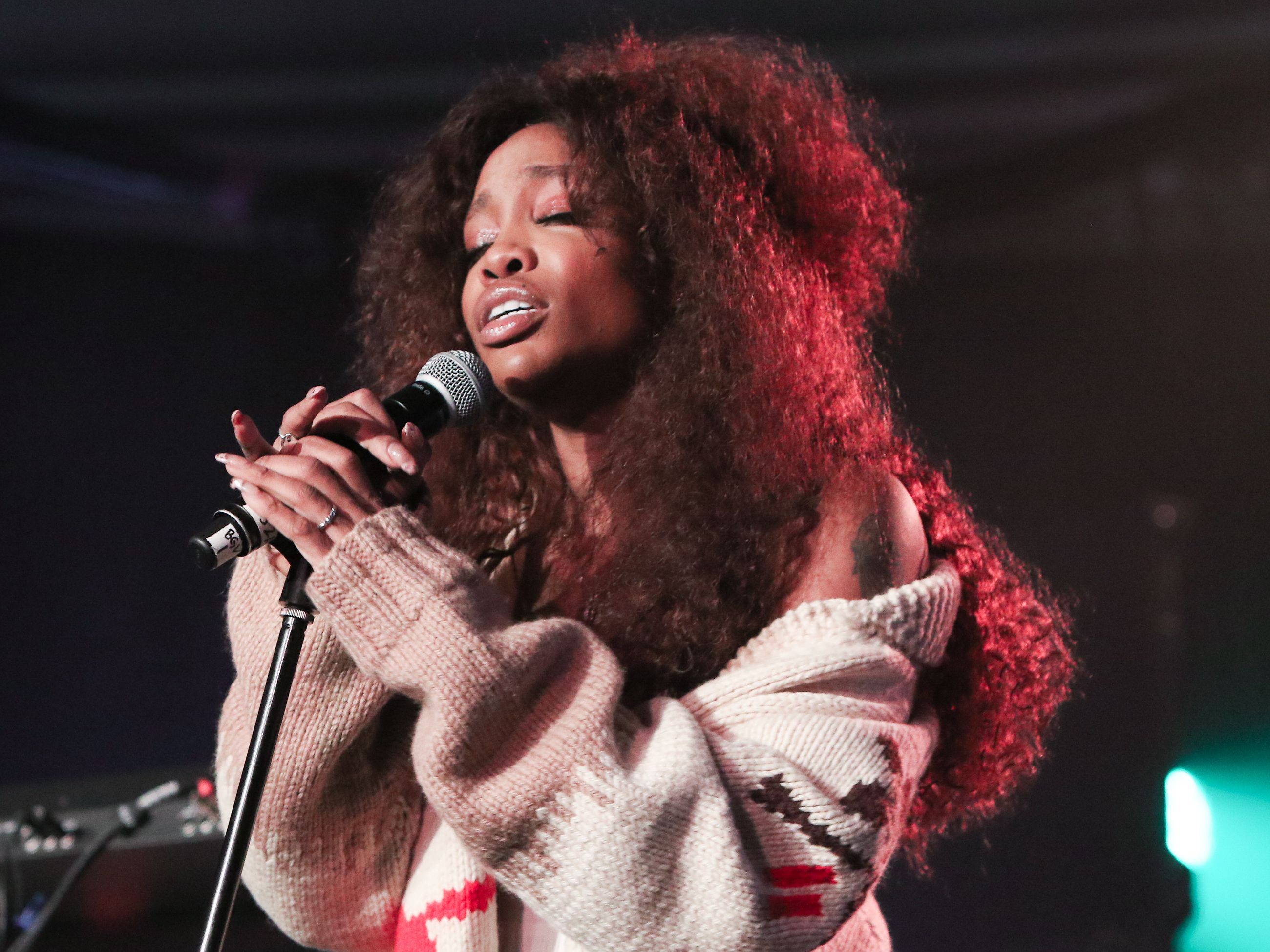 The demand for R&B’s real and rawness has been appearing in subtle ways over the last few years; its resurgence into Pop Culture is happening, now.

Billboard’s Top 10 of its Hot 100 Chart had popped up on my Twitter timeline and as usual, I didn’t know half of the mainstream pop songs on the list, but a familiar name caught my eye and pleasantly took me by surprise: SZA. Her single, “Good Days,” was released on Christmas Day of 2020 and debuted at number 38. Since its release, it has been trending on TikTok, Instagram, and all over social media which has skyrocketed it to new heights. “Good Days” was placed at number 10 which made me think of the rarity of R&B songs being in the Top 10, and how I would love to see more R&B music a part of viral trends, social media challenges and across all other platforms ultimately increasing the genre’s streams and pushing the music higher up on the charts.

In Billboard’s R&B & Hip-Hop Power Players 2020 cover story, Jhene Aiko, Kehlani, Summer Walker and Teyana Taylor discussed the beauty of how as R&B artists their stories and lyrics may cross similar paths, but the contrast in their individual artistic expressions reveal the layers of the genre that continues to birth more sub-genres as times goes on. When asked about where R&B is headed, Taylor perfectly summed things up. “We’ll always be here. When a n*gga is in the prime of his life, he wants to deal with everyone. But there’s always that one girl that’s going to be there for him. When he’s really ready to get it together and settle down, that’s who he’ll go looking for. That’s what I feel R&B is. R&B is always going to be the realest b*tch in the world.”

The demand for R&B’s real and rawness has been appearing in subtle ways over the last few years. One of such instances is SZA’s Ctrl – released in 2017 – which appeared back on the Billboard 200 alongside her recent top 10 hit. Another example is how pop artists, that will be left unnamed, will release music with clear R&B influence – as Aiko mentioned to Billboard – yet it still gets categorized as pop. NSYNC, Justin Timberlake, Christina Aguilera, Sam Smith, and the list goes on to include some of today’s artists, as R&B continues to stand as one of the most influential genres in music. Yet in return, for over decades it’s been like clockwork for the industry to look past Black artists that blend genres and place them into one dimensional boxes, especially for award show nominations (i.e. the Grammys creating “Progressive R&B”). This ultimately limits their airplay, leading to restricted audience reach and being less likely to be acclimated into pop culture.

Bree Runway and Chloe x Halle are a few artists that come to mind with these ongoing obstacles for R&B artists. Runway has always been outspoken about her experience from the start of her career and tweeted about it in September 2020. One of the tweets being, “Normalise calling Bree Runway a popSTAR, not a rap girl or a R&B sensation.”

normalise calling bree runway a popSTAR, not a rap girl or a rnb sensation x

Another round of tweets surrounding the flawed exclusivity of pop music erupted from frustrated Chloe x Halle fans when “Do It” only received a “Best R&B” VMAs nomination and were snubbed from the “Best Pop” category.

Why is Do It by Chloe x Halle nominated in the R&B category? If Ariana or Dua Lipa had recorded it, it would be in the pop category – because it is a POP song.

if dark horse by katy perry and 7 rings by ariana grande are pop songs, then do it by chloe x halle is a pop song.

SZA is an artist with R&B roots that has fortunately had the success of blurring the lines of the genre when it comes to both her sound and fanbase. Recently, the love and support for “Good Days” exploded into a massive wave of fan videos from dance and singing covers to instrumentalists, funny TikToks, and so many more. SZA’s Instagram story reposts of the fan love shows the great extent of just how creative people are getting with social media trends. There was even a dance challenge for her unreleased music.

“Good Days” isn’t the only recent instance where an R&B song took off with the help of social media. Back in December 2019, before the full song even dropped, Kehlani’s “All Me” was highly anticipated over social media when she posted a snippet of it on Triller, which eventually made its rounds to other platforms. I imagine how much more it would have blown up if it had been released now when artists are seeing their streams booming thanks to TikTok.

For his track “You Got It,” R&B singer and songwriter Vedo created the Boss Up challenge on TikTok and today has over 100 million streams independently and is certified Gold. Chloe x Halle’s “Do It” is another Gold R&B record (Yes, it’s still also Pop) that took the TikTok challenge wave by storm, as it was one of the songs of Summer 2020. Chris Brown and Young Thug’s “Go Crazy” was yet another R&B song turned into a challenge, which had to have been one of the most popular ones of last year, as the 2x-platinum song peaked at number 5 on Billboard’s Hot 100.

And, if we want to discuss R&B’s potential longevity on social media, Teedra Moses’ “Be Your Girl”, that was geniusly remixed by Kaytranada, has consistently been all over YouTube creators’ videos for years.

As outlets and media platforms have slowed down on promoting R&B, social platforms can and have aided in pushing the genre further into pop culture. Streams and social media go hand-in-hand and what better time than now for R&B artists to take advantage of this as streaming has been the genre’s saving grace. “The genre was in desperate need of new outlets when talk of its death originally gained steam”, Spotify’s Creative Director Carl Chery writes in Complex. “And its resurgence over the past five years coincides with the rise of a powerful new medium: streaming.” Chery indicates the significance of playlists like Spotify’s Are&Be and Apple Music’s R&B Now, in which 25% of its music selection are R&B singers.

Verzuz has also played a factor in an increase for R&B streams. Recently, the Ashanti and Keyshia Cole battle broke an Instagram Live record. Verzuz shared the news that “More than 8.1 million viewers had tuned in across Instagram, Apple Music and other streams.” After Brandy and Monica’s battle with over 6 million viewers, the two R&B legends had 21.9 million U.S. on-demand streams in just 3 days. Numbers don’t lie, R&B music continues to be an underrated gem that is still sought out for.

Despite the lack of mainstream media covering R&B, creators, bloggers and writers are using their own platforms to highlight and promote R&B music. Branford Jones’ They HaveThe Range on Instagram is a music media platform that captures true vocalists, which are mostly Black R&B artists and singers. It’s had viral challenges from legendary artists and their classic records including Deborah Cox’s “Nobody’s Supposed to Be Here.” Dollar on Twitter has always been active with showing his support of R&B and in December 2020 dropped his website, RNBIsEverything. YouTuber Terrell Grice brings both seasoned and upcoming R&B artists onto his channel for the game of Song Association, as well as both heartfelt and transparent interviews on topics ranging from their personal background stories to open dialogue around the harsh reality of the music industry.

What truly sets R&B apart is its versatility which in turn boosts its universal appeal. The challenges, trends and support are all there for more eyes to be on the genre, but a bigger push, creatively speaking, is necessary for the movement to gain a wider audience. A creative plethora exists within the world of the social, online community for more artists to hop on board and amplify their voices and music whether that be to team up with like-minded creators and social media influencers or to create a challenge that connects them with their fanbase. The movement would help further silence the false narrative of R&B being a dying genre when in reality we’re slowly watching its renaissance.

14 Rising Baltimore Artists to Watch in 2021